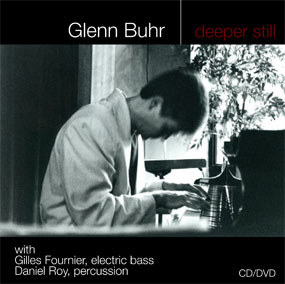 This text will be replaced by the flash music player.

Back to music page

Sound Art and the Blues

This CD is an excursion for me. A return to my roots, stirred up with some of my more recent interests in contemporary music and sound art.

I'm a creative musician. It's my job. I write music for string quartets, ballet companies, symphony orchestras, theatre and film directors. Still, I'm pretty much a normal guy who grew up in the suburbs.

When I was a kid, there was a lot of music in my household. I grew up in the 60's when stereos where in everyone's living room. But no one in the house listened to classical music, except for me when I practiced piano. (My sister watched reruns of Sea Hunt and Maverick while I practiced. She took dances lessons. and was quite good, but for some reason young dancers don't have to practice every day, and young musicians do).

As a child, I tolerated the piano lessons and the practicing, but the blues interested me the most. First John Mayall and Eric Clapton, then Led Zeppelin and Hendrix. Those rock/blues bands from the 60's and 70's all had a big sound.

Electric guitars and basses, big cymbals and drums; distortion and reverb. And I tried to imitate those sounds on my parents' old Heintzman upright - last tuned in the early 60's. (Every note on that piano was blue.)

My earlier life in the classical music world led to a kind of willful self-supression. For a while there, I thought I was a classical composer. Everyone else seemed to think so.

One of my musical friends often said that everything leads back to the blues. So, conjuring that idea, I wrote a string quartet subtitled sixblues, a set of variations on Charles Mingus' Goodbye Pork Pie Hat. And a few abstract orchestral works loosely based on jazz standards.

Then I started to play the piano in public again. 50's and 60's jazz standards. And the blues. Eastern ragas and free improvisation. I also experimented with dense, violent textures of sound, inter-cut with sparse, gentle music.

I try to contain all of my interests in my playing. And sometimes it's an odd mix.

Like the old world fugue on this CD, Pine Trees (actually inspired by a painting I saw in Japan), which is followed by Gee Baby Remix, a wacky rejigging of a jazz standard from the 20's. Or the almost blues of Monk's Bemsha Swing, which is preceded by Japanese Lyric, a meditative improvisation influenced by classical Indian music.

deeper still, is a sound art concept. The music is both active and tranquil, slowly descending, and becoming dissonant and explosive without losing the sense of calm. That's followed by Steal Away, a 12-bar blues with a hiphop swing.

omaggio a miles is an abstract rendering of the Miles Davis/ Bill Evans composition Blue in Green. It's followed by st jean, which is based on a 13th-century chant, though it sounds at times more like early Pink Floyd.

When I teach composition and improvisation, I always tell my students that the most important thing for an artist is to be one's self. Not easy. The self is a complicated thing. And we're all different.

So I don't think that this CD shows that I have a split personality, as it

might first seem to someone expecting a jazz/blues CD or a new music CD rather than this unusual mix of both. It simply represents my own interests. And for that, I use musical materials that are close to home. Like my piano, which is never far away.

I've been influenced by all of the songs, structures, solos and compositions that I admire. And I'm inspired by working with excellent musicians, like Gilles Fournier and Daniel Roy, who performed so wonderfully on this concert/recording. They're good friends, and also brilliant artists.

And we're all from Winnipeg. I hope you can hear that in this music.